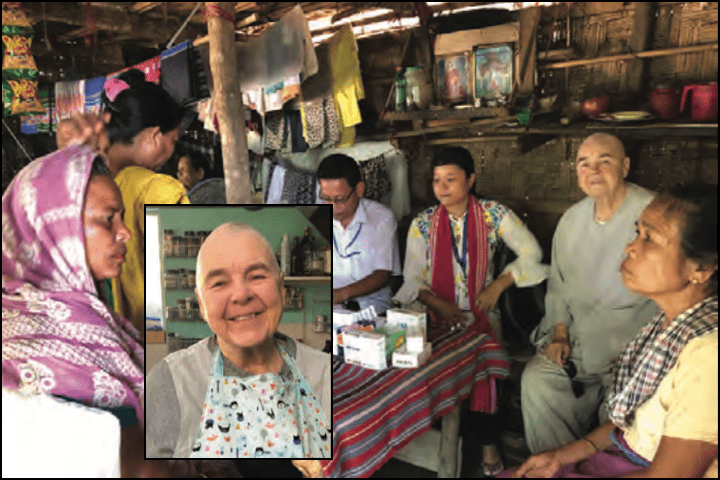 One thing I have learned: it is very difficult to help people. We tend to think “I’ll just get there and help them (the poor, the sick, the homeless).” “Ok, now I have some money, I can really change things.” Sad to say, after ten years of running the Douglas A. Campbell Foundation, I have learned: it is difﬁcult to help people, but NOT impossible.

In countries like Cambodia with about 3,000 NGOs, (Nonprofit Organizations) 500 active, 200 funded according to a Cambodian NGO friend, NGOism is rampant. “No need to make an effort to buy a computer, someone will give me one!” a young friend told me when I suggested saving up. And so, one becomes pessimistic and then, if you research just a bit, you ﬁnd that actually things are getting much better: in 1990, 35.9 percent of the world lived in extreme poverty (less than $1.90 a day) reduced to 10 per cent in 2015 = Things Are Improving!

In spite of this, the quest is on: How to do a good project?

When I was 21, I went to Morocco with a large NGO; it was the aim of my life and I intended to spend the rest of my days as a volunteer in different parts of the world. Quickly, I was horrified by the system (we ate prison food and the higher-ups had servants, donated goods were squandered). Maybe I was simply naïve. I continued with another NGO but then gave up and was ordained in Sri Lanka in 1976. Fast forward to having charge of my uncle in Los Angeles in 1999 and being “obliged” to take over his foundation which became fully active in 2008, after his death.

The first decision I made was to always visit all projects (over a certain amount invested) personally or delegate someone to do so. From the first, I was greeted by amazement as most donors don’t/can’t visit their projects. Even some countries don’t really know where their billions go, and NGOs are not good at follow-ups either. This is the main reason that I work a lot with Lotus Outreach (www.lotusoutreach.org) as their monitoring is very thorough and they are not afraid to admit when they are wrong!

So what to do? Well, I’ve lived for 25 years in Asia and we have started working with personal contacts, people who can monitor the project on the ground. For the moment, I define a good project as minimum input for maximum impact. One thing has become clear: change is not easy. Yes, they want a well. Yes, they want a pump. But do they know how to look after it all? Do they know how to share without one family benefiting, exacting some payment or other? And if they have all that, do they know how to improve sanitation so that they don’t get sick? An example: October 6, 2019 CNN headline: Half of India couldn’t access a toilet five years ago. Prime Minister Modi built 110M latrines – but will people use them?

One of the most successful and satisfying projects that we were involved in was IRD, Integrated Rural Development. Unfortunately, it is time consuming and expensive, but the results are fabulous. It consists, in our case, of setting up self-help (called Sep Hep in Khmer) groups of about 20 members which manage the well and also offer small loans (1% interest) for different carefully verified projects. When the well is installed, a one-time charge of US$2.50 is required of each family and after that they must pay $0.10 a month. This money is mainly kept for repairs. Care is taken that the well is never in personal hands or controlled by anyone. All jobs (head and accountant) are elected; most groups were led by women!

One lovely success story was of a woman with five children who had sold her land and house to get medical care for her husband who eventually died. She then joined a group and borrowed $75 to buy 40 kilos of fish to sell in the market – her usual employ. Now two years later, she has been able to buy a piece of land and hopes to build a new home.

Though we can’t do full IRD, the well building goes on, and this year we have funded 12 serving 233 households. Here, too, there is a whole mass of guidelines. They have to be at least two kilometers apart (everyone wants one in their back garden). They have to serve at least 20 families; have to have a managing committee of people NOT from the same family; payment for use has to be made (money is used for maintaining the washers, barrier etc.); it has to be on land where a special agreement is set up (no proﬁting, no exclusions, etc.). In addition, extra money has been added for full-time dedicated staff to train and follow up for one year.

Another project I love is LotusPedals. Lotus Outreach organizes the giving away of bicycles, mainly to girls, in Cambodia and India because it keeps them in school. But these are not just gifts. Each girl has to sign a contract that: only she will use the bike; she has to live at least two kilometers from the school; the bike cannot be sold or rented out; she has to stay in school a minimum of two years; she has to look after the bike. And they check regularly so that any breach of the contract means that the bike is removed. In the same vein, there are the Blossom buses which carry girls in rural India to and from school.

We had a very enlightening moment two years ago when the district governor’s representative addressed the recipients. She told them of how she had received a bike when she was young and how it had helped her to stay in school and that she still had the bike and it was still working well! (We didn’t know this when we invited her!)

After a lot of research, Lotus Outreach has found that second-hand Japanese bikes are the toughest. (Never knew there were so many old bikes in Japan!) They aren’t beautiful but they are sturdy. We add a basket, a bell, a kit for basic fixing (which they are trained to use), and stickers from us all. The end product looks good! (If you’d like more pictures, email me mujin@me.com.)

My favorite project is building new toilets, repairing old ones, training in cleaning and maintenance of toilets. We did a lot in Sri Lanka mainly in schools and have repaired and changed a lot in Moanoghar, the indigenous school in the Chittagong Hill Tracts of Bangladesh (www.moanoghar.org), and hope to do more.

Moanoghar is amazing with over 600 boarders and about 500 day students. It runs from age six to 18+ (but no one knows how old they are!). Our foundation is currently funding the in-house and out-reach clinics. After major campaigns to clean up the compound, build toilets, install proper LED lights (offered by friends), rebuilding dormitories and a new block of school rooms, we are now working on a Technical College. (If you want an adventure, please let me know so I can arrange for you to visit and share your expertise!)

For me, the greatest act we can per-form today is sharing knowledge. We are always on the lookout for someone willing to go and teach accounting, baking, hygiene, and so on. Unfortunately for Bangladesh, as soon as willing individuals hear where it is, they decline. It is a little like the general mass of NGOs: they go where it is easier, more comfortable, and tend to all collect in the same areas. Of course, we have had our failures. In spite of careful management by locals, the money disappeared, the thing was never built or only partially, and we learned. Even so…

Please join us as the quest is on: How to do a good project? www.douglasacampbellfoundation.org.

Mujin Sunim oversees the Douglas A. Campbell Foundation and has a small sangha in Switzerland.