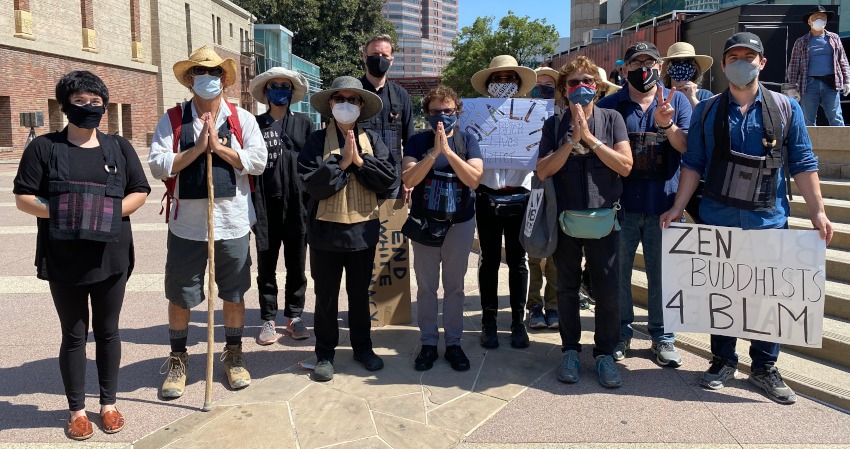 Whereas, the United States of America has, from its inception, implicitly and explicitly promoted a white-supremacist system, as evidenced in the genocide of Indigenous peoples and the institution of slavery, and

Whereas, this systemic white-supremacist ideology has resulted in the oppression of Indigenous peoples, Blacks, Latinx, Asians and all those who are deemed People of Color, to the present day, and

Whereas, George Floyd has become a “Bodhisattva in death,” awakening the world to take actions that will end, once and forevermore, the dehumanizing and deluded narrative of “other” and its consequences, and

Whereas, our country is currently experiencing a potentially transformative moment to forever root out this racist ideology as it is manifested in individual, collective, and systemic behaviors, and

Whereas, the injustices that target Black lives in particular have given rise to the undisputed dharma that Black Lives Matter, and

Whereas, white-supremacist racism and all forms of racism are the most virulent and dangerous forms of delusion, that of a separate identity of human beings when, in fact, all beings are empty of separateness and are wholly interdependent, and

Whereas, the vow of Zen Buddhist practitioners is to end suffering caused by delusion, including the ways that it manifests in subtle and overt forms of violence such as murder, lynching, torture, unjust treatment under the law, and unequal opportunities of employment, education, and access to health services, public spaces and opportunities.

Therefore, we, the stewards of The Zen Center of Los Angeles, as practitioners of the Buddha Way, pledge to end these delusions by diligently applying the practices of The Three Tenets of Not-Knowing, Bearing Witness, and Taking Action.

The Teachers and Board of Directors Zen Center of Los Angeles • June 14, 2020

*Additional Board members noted above.