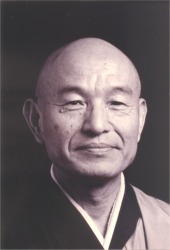 Born into a Zen temple family, Taizan Maezumi Roshi was ordained as a Soto Zen monk at the age of eleven. He lived with his parents Baian Hakujun Kuroda Roshi and Yoshie Maezumi Kuroda and six brothers at Koshinji, the family temple in Otawara, Japan. He later took his mother’s family name.

He received degrees in Oriental Literature and Philosophy from Komazawa University and studied at Sojiji, one of the two main Soto monasteries in Japan. While studying at Komazawa, he lived at the dojo of the lay Rinzai Master Osaka Koryu and began koan study. In 1955, Maezumi Roshi received Dharma transmission from his teacher and father Kuroda Roshi, who headed the Soto Sect Supreme Court and was one of the leading figures of Japanese Soto Zen.

In 1956, Maezumi Roshi came to Los Angeles as assistant to Yamada Reirin Roshi at Zenshuji Temple, the U.S. Soto Zen Headquarters. He arrived in Los Angeles with an unshakeable vow to establish Zen Buddhism in the West. It was in Los Angeles that he met his third teacher, Yasutani Hakuun Roshi, and began koan study with him.

In 1967, he and his family (photo above) established the Zen Center of Los Angeles. Maezumi Roshi established several temples in the United States, including Kanzeon Zen Sangha, Zen Mountain Monastery, and Zen Mountain Center. In 1970, he received Dharma Transmission from Yasutani Roshi, and in 1973, from Koryu Roshi. Thus, Maezumi Roshi became one of few teachers to receive Inka from both the Inzan and Takuju Rinzai lineages, as well as Dharma Transmission in the Soto lineage.

In 1976, he established The Kuroda Institute for the Study of Buddhism and Human Values. The Institute publishes a book series with the University of Hawaii Press devoted to the translation of East Asian Buddhist classics. Maezumi Roshi also founded the Dharma Institute in Mexico City.

Maezumi Roshi founded the White Plum Asanga, named after his father Baian Hakujun (White haku, Plum bai). There are now over fifty teachers and Zen groups that are affiliated with the White Plum Lineage. He transmitted the Dharma to twelve successors, Roshi Bernie Glassman being his first disciple in 1977. Maezumi Roshi ordained 68 Zen priests and gave the lay Buddhist precepts to over 500 people. He was married and the father of three children.

Maezumi Roshi was instrumental in the formation of the Soto Zen Buddhist Association (SZBA) of American Soto Zen teachers. He promoted exchange programs among priests and lay practitioners between the United States and Japan. He was editor of the Zen Writing Series, recently republished as On Zen Practice: Body, Breath, and Mind and The Hazy Moon of Enlightenment (which includes his commentary on Genjokoan), both by Wisdom Publications, and Appreciate Your Life, published posthumously by Shambhala Publications. 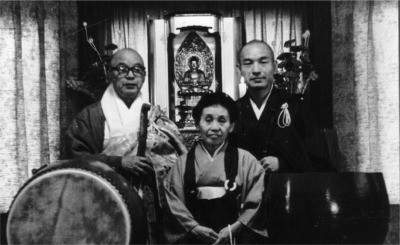