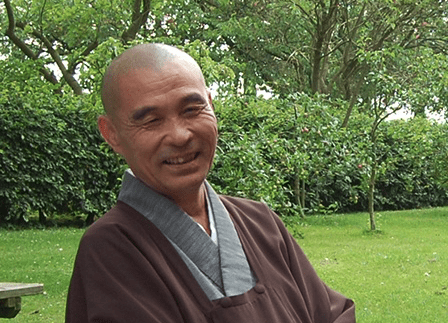 Roshi Junyu Kuroda (Baigaku Junyu Daiosho, 1940- 2021), a younger brother of Maezumi Roshi and a member of ZCLA’s Founding Family, died from prostate cancer at Kirigaya-ji, his temple in Tokyo, on November 9th at the age of 81. Although Hojo-san had written to some of us about his illness, my body registered his death slowly, like small waves washing over me, gently realigning me to this new reality. He was our last link to this generation of the Kuroda Family.

I had the privilege of meeting Maezumi Roshi’s brothers, three of whom had their own temples, including Koshinji, the family temple at Otawara. They all had strong personalities, were confident and ambitious and devoted to the Buddha Dharma. My first meeting with Junyu, who went by Junpu in the early years, was as a young priest who came to ZCLA with his brothers, whose dominating personalities barely made space for their younger brother. Over the years, however, the young Junpu became the mature Junyu, who built Kirigaya-ji into a thriving temple serving 2,000 families. He also built Fujidera, a small temple near Mt. Fuji.

Hojo-san was dedicated to serving Maezumi Roshi and his Dharma work in the West. He came to ZCLA to help establish temple forms in the early years. He created the beautifully carved calligraphed plaques hanging in the front gaitan that announce the Zendo activities—before the sauna accident in which he lost his fingers. He later took up the calligraphy brush again. For decades, Hojo-san hosted Maezumi Roshi every April on his annual visit to family and colleagues. How can we know how much his contributions eased the way for Maezumi Roshi, who once told me, “I can do my work because of Junyu’s support.”

Like his brothers, Hojo-san was an exceedingly generous and complex person with a sensitive and fierce spirit. I recall being with Maezumi Roshi when the call came from Japan that Junyu had suffered a terrible accident in the sauna. Many years later, Hojo-san recounted to me that he remembered his brothers gathered around his hospital bed discussing his funeral. Although it was likely an understandable conversation given his condition, Junyu was furious at the memory of it even years later! Nevertheless, he often had a twinkle in his eyes regardless of how challenging his life was. Later, he would say, “I have no extra, no luggage. Just I am I.” 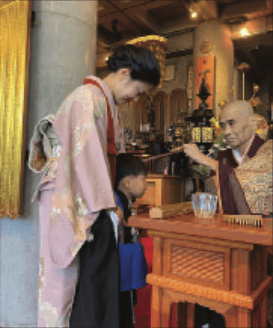 Hojo-san’s indomitable spirit is evidenced in a photograph of him nearing the end of his life that was shared by Roshi Tenkei of Zen River in Holland. The photo shows Hojo-san blessing a young boy. One can see death encroaching into Hojo-san’s face and something else, too: the fierce focus of one who is living vow. Maezumi Roshi once told me that when they were kids, his mother would say repeatedly to them, “When you grow up, do something for the Dharma.” Roshi reflected, “Imagine saying that to a kid? We did not even know what the Dharma was.” And yet, in this mesmerizing photo, one can see the impact of her words and how deeply it had penetrated into her young son.

After the passing of Maezumi Roshi, Hojo-san came into his own as a Dharma teacher. He trained and transmitted the Dharma to monks from Japan, Holland, Brasil, Poland, and Peru. He linked across sectarian boundaries, a characteristic I believe he inherited from his father, Baian Hakujun Daiosho. He generously signed my Soto Shu registration papers for Zuise in Japan after Roshi Bernie left the Soto Shu. In 2004, he enthusiastically hosted a pilgrimage to Japanese temples and sights for ZCLA members. Hojo-san was a benefactor, teacher, and example to many of us in innumerable ways which will continue to reverberate throughout the years. We are deeply grateful.

Shortly before his death, he wrote this poem:

Some were good, some were bad

In my dreams I am a pilgrim, like Sudhana! The Dharmakaya never dies

Please read Hojo-san’s obituary as posted by the White Plum Asanga at https://whiteplum.org/news/.