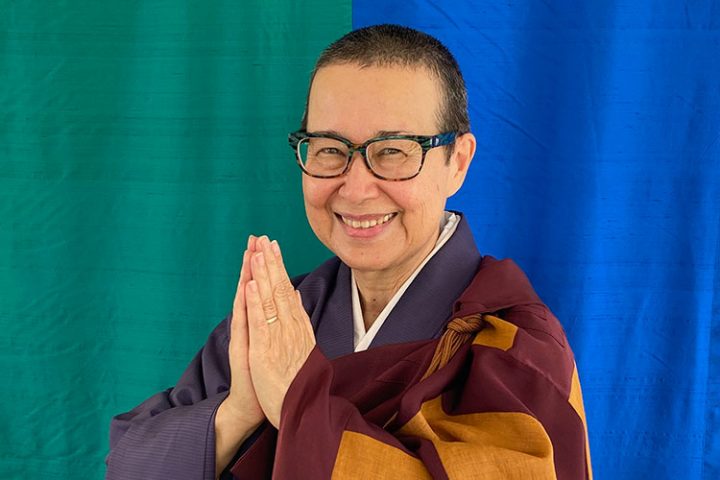 Since I attained Buddhahood, the number of kalpas that have passed is an immeasurable hundreds, thousands, ten thousands, millions, trillions, asamkhyas.
Constantly I have preached the Law, teaching, converting countless millions of living beings. Causing them to enter the Buddha way, all this for immeasurable kalpas.
In order to save living beings, as an expedient means I appear to enter nirvana but in truth I do not pass into extinction. I am always here, preaching the Law.

These are the opening lines of the Lotus Sutra’s Chapter 16, “The Life Span of the Thus Come One:” Who is speaking these words?
The Lifespan chapter, the midpoint of the Lotus Sutra, marks a pivot in the voice of the Sutra. Up until this point, the Lotus Sutra is spoken through the voice of Shakyamuni Buddha. The Mahayana sutras, which were created hundreds of years after the Buddha’s Parinirvana, were not spoken by the historical Buddha. Although the Pali Canon is attributed to the historical Buddha, scholars say that, if indeed there are actual words of the Buddha, there are likely very few that survive in the Canon itself. The Canon is spoken through the collective memories of Shakyamuni Buddha’s disciples, most notably through Upali, a foremost disciple responsible for the monastic discipline, and Ananda, the Buddha’s attendant with an extraordinary memory.

The Lotus Sutra itself appears about 700 years after the Buddha’s Parinirvana. So who is speaking about the Life Span of the Tathagata, if it is not the historical Buddha? The Buddha who speaks the Lotus Sutra is none other than Sambogakaya Buddha. The Trikaya—Tri means “three” or “triple” and kaya means “body”—are part of the evolution of Buddhism when the person of Shakyamuni Buddha is no longer accessible. The Trikaya constitute the Buddhist trinity: the Dharmakaya or Ultimate Reality dimension, the Nirmanakaya or Human dimension, and the Sambogakaya or Primordial/Eternal) dimension. These triple bodies of Buddha are articulated as the Mahayana Sutras take root. Hence, in the Lotus Sutra, the mainstream traditional story of Gautama’s quest for enlightenment is upended. 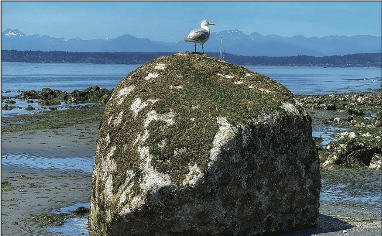 The Lotus Sutra proclaims that the account of the historical Shakyamuni Buddha’s life was merely a skillful means to help people wake up. The Sutra says that if people think that the Buddha lives for innumerable eons, they will become even more lazy and indulgent and neglect practice all together. However, if the Buddha says that he will enter Parinirvana and be gone forever, people will make an extra effort to awaken. In Chapter 16 we learn that Samboghakaya Buddha, who preaches this Sutra, was enlightened eons ago and that this Buddha manifestation is not limited to a human lifespan but has an immeasurable lifespan. Therefore, although Shakyamuni Buddha appears to preach the Lotus Sutra at the end of his forty-five years of teaching, his Samboghakaya body will, in fact, continue on for billions of eons to come.

The Trikaya is interpreted differently in the Mahayana Buddhist schools. In terms of the Lotus Sutra, the key interpreters of the Sutra also had different views of the Trikaya which lead to various interpretations of the Lotus Sutra itself. The key interpreters go back to the Chinese Ancestor Zhiyi, the founder of the Tendai School in China, to the most influential of the modern-day interpreters Nichiren, the Founder of the Lotus School (now called Nichiren Buddhism) in Japan, and several others since then. Nichiren himself preached that all three Buddha bodies of the Trikaya find their expression in Shakyamuni Buddha and, furthermore, the time-space dimensions all find their manifestation as “the single thought-moment comprising three thousand realms in actuality.” This means, primarily, that rather than a notion of linear practice, cause-and-effect are present all together in the very act of practice right here, right now.

Shakyamuni Buddha’s lifestory as a skillful means for waking people up is an intriguing idea. Imagine the time when no one alive knew the historical person of Shakyamuni Buddha—there was no longer anyone alive who had ever seen him, heard him, or had been in his presence. Can we ourselves imagine a time when no one is any longer alive who knew the persons of Maezumi Roshi or Roshi Bernie, a time when no one will be able to reference direct memories and experiences of either one of them? Indeed, what will live on to inspire and awaken people?

I read an article on the death of the King Goodwill Zwelithini, the 72-year-old king of the Zulu nation, who died in March of this year. It was reported that “For his subjects King Zwelithni has not been buried. They use
the Zulu term “ukutshalwa,” a loose translation of which means “planting”—to imply this is not the end of his influence on the people he ruled for more than five decades. His leaving is understood simply as a transition to becoming an ancestor, joining generations of other Zulu kings.”

I found this a provocative perspective in light of the homage we pay to the Zen Ancestors. Are we the recipients of the universal vows taken up for the benefit of all beings that are planted in the lifetimes of the Ancestors? How do we see these Ancestors in light of the Trikaya?

If beings awaken and live out their lifespans teaching the Buddhadharma and then become ancestors upon passing from this realm, what remains? Maezumi Roshi often said that what remains is our vows. The vows continue to grow and expand and carry our lives forward as we ourselves commit to them. From this perspective, one cannot but live a life steeped in gratitude.

Dharmakaya Buddha is the dimension of Ultimate Reality. We call it Buddha Nature, which is unconditioned, without characteristics, formless. The Dharmakaya body is not subject to birth and death and to cause and effect. It is the groundless ground—MU—beyond all concepts and processes. The Dharmakaya body has two aspects: the Nirmanakaya and the Samboghakaya.

Nirmanakaya Buddha is the dimension of the phenomenal body, the human form that appears in the world. Specifically, this refers to the human body that has undergone the transformation of Awakening, sometimes called the Transformation Body. The historical person Siddhartha became the Nirmankaya Buddha we know as Shakyamuni Buddha. In a sense, you and I are Nirmanakaya Buddhas. You and I have human form; however we are not yet fully awakened, although we are fully endowed with the potential to awaken and to live a life of vows, rather than with a passive attitude towards cause and effect. This is not to say that cause and effect are not operative, but rather that it is lived out as vow. This is expressed so powerfully at the end of Chapter 16:

At all times I think to myself:
How can I cause living beings
to gain entry into the unsurpassed way
and quickly acquire the body of a Buddha?

You and I are Nirmanakaya Buddhas.

Samboghakaya Buddha is the dimension of the Bliss or Reward Body endowed with transcendent powers. I like to call it the Fulfilled Body, the form that emerges from eons of practice and complete awakening and emanates and continues as vow. In this Chapter, it is expressed thus:

Samboghakaya Buddhas are often regarded as divine bodies—the eternal, the vast life-span body. This is a very ancient Buddha. His lifespan, which unlike the Dharmakaya body, has a begining and end, is nevertheless beyond what we can conceive of. This in itself situates us in the boundlessness of reality. The life of the historical Siddhartha, the Sutra tells us, is merely a manifestation of this great cosmic, primordial Buddha. Thus, the historical Siddhartha, according to the Lotus Sutra, appears in this world as a skillful means to guide us to awakening. This very world in which you and I are living right now is Samboghakaya Buddha’s realm—his Buddha field, his pure land, which is described as follows:

When living beings witness the end of a kalpa and all is consumed in a great fire, this, my land, remains safe and tranquil, constantly filled with heavenly and human beings. The halls and pavilions in its gardens and groves are adorned with various kinds of gems.
Jeweled trees abound in flowers and fruit where living beings enjoy themselves at ease. The gods strike heavenly drums, constantly making many kinds of music. Mandarava blossoms rain down, scattering over the Buddha and the great assembly. My pure land is not destroyed, yet the multitude see it as consumed in fire, with anxiety, fear and other sufferings filling it everywhere.

Constantly, I have preached the Law.

What does this say to you? How does one access this “safe and tranquil” place—this pure land—in the midst of the suffering of our world? We access it through vow— through activating the great bodhisattva vows to liberate each other. Samboghakya Buddha appears in this world through vow and has one purpose only: to cause living beings—you and I—to wake up! In this way, the Lotus Sutra expands so-called Buddhism beyond the historical Shakyamuni Buddha and thrusts us into a lifespan that does not expire when a physical body dies. Rather, it thrusts us into a lifespan of vows, which are immeasurable and abide for countless eons to come to help living beings:

At that time I tell the living beings that I am always here, never entering extinction,
but that because of the power of an expedient means at times I appear to be extinct, at other times not, and that if there are living beings in other lands who are reverent and sincere in their wish to believe, then among them too I will preach the unsurpassed Law.

What is this unsurpassed Law? The Buddha of the Lotus Sutra says it is this: I am always here! I Am Really Here! I Am Here! I Am! The timeless realm of the Buddha’s awakening is constantly abiding and is always available to you here, now.
Who is this that is always here? What is it? The Buddhist trinity manifests in you yourself—it cannot be otherwise. The Great Master Rinzai said: “Do you wish to be not different from the Buddhas and Ancestors? Then just do not look for anything outside. The pure light of your own heart-mind at this instant is the Dharmakaya Buddha in your own house. The non-differentiating light of your heart-mind at this instant is the Sambhogakaya Buddha
in your own house. The non-discriminating light of your own heart at this instant is the Nirmanakaya Buddha in your own house. This trinity of the Buddha’s body is none other than here before your eyes, listening to my expounding the Dharma.

And I vividly recall a student once asking Maezumi Roshi, “Roshi, Who is Sambogakaya Buddha?” Maezumi Roshi replied, “It’s you, stupid!” All the Buddha Ancestors and Triple Body of the Buddhas comes down to your very hands and eyes—this body reading these words—right here, right now!
You and I are transforming our inner worlds and our outer worlds as well. So tell me, these warm summer days, how are you living your vows? 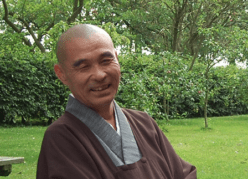