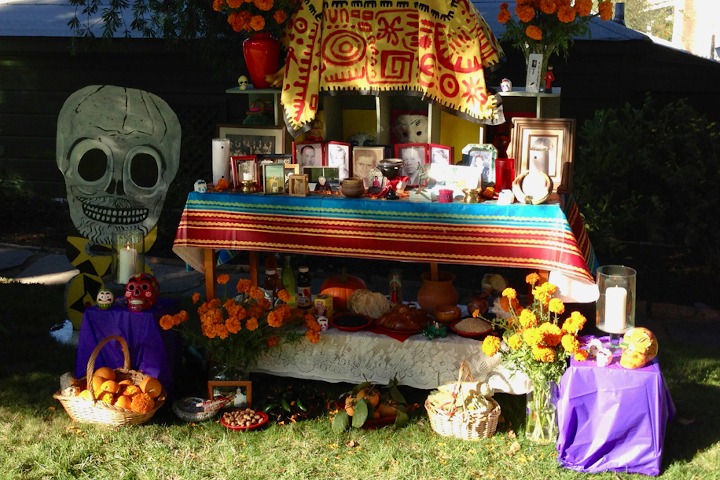 Throughout the world, countries and cultures since time immemorial have paid homage to their ancestors in diverse rites and customs. In Mexico and Central America the belief is that the dead have a continued existence and may possess the ability to inﬂuence the fortunes of the living. The commemoration of the beloved deceased, in Latin American countries, takes place during a three-day celebration of Dia de los Muertos, the Day of the Dead.

The ritual originated with the Aztecs thousands of years ago; it merged with elements of Christianity’s celebration of All Saints and All Souls Day in the 16th century. For Dia de los Muertos, on November 1st (All Saints Day), the spirits of deceased children are remembered, and adults are remembered on November 2nd (All Souls Day).

Dia de los Muertos is a large, festive celebration and veneration of life and death. In paying homage to the ancestors, elaborate altars are built and decorations of banners and skeletons are displayed. The most recognized symbol on the altar is the ofrenda (offering) arranged on a three-level altar representing heaven, earth and the under-world. Representing the four elements (ﬁre, water, earth, wind), marigolds, incense, candles, and water are placed on the altar. Visits and picnics at gravesites are common as are mariachi minstrels at the cemetery.

The altar offerings are many, and include food and drink to nourish the spirits after their long journey to earth and to lighten their return to the spirit world. Objects are placed on ritual displays that include sugar skulls and pan de muerto, and personal possessions of the loved ones such as toys, items of clothing, and musical instruments. Central to the altar are photographs and personal possessions of the departed loved ones.

Largely because of the Mexican-American influence in California, the Dia de los Muertos celebration is growing in popularity and the celebrations are extending well beyond the Latino community. Grand Park in downtown Los Angeles displayed over 40 different altars this year, representing dozens of community and social service organizations with the theme “Looking to the Past to Build the Future.” Across the street, the Music Center Plaza held an art installation and offered discussions about the customs and traditions of this important feast invoking our beloved ancestors.

Ando is a long-time practitioner and our new Head Trainee at ZCLA.