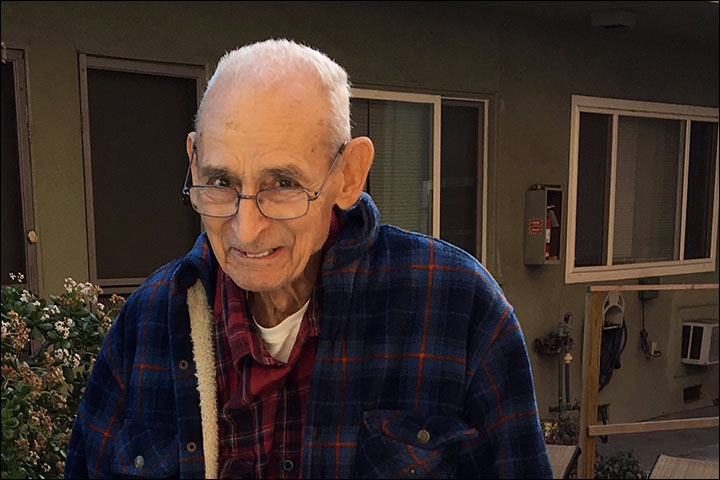 Charles Duran, a resident member of ZCLA for some 40 years, passed away on July 23, 2019, at the age of 90. Charles was known for his ability as an electrician and a skillful jack-of-all-trades who had worked faithfully at the upkeep of the Zen Center through his eighties. He was a truly unique individual with a vigorous curiosity, especially in areas of the mind, philosophy, history, and politics. We in the sangha knew him for his sense of humor and his wide-ranging conversations: he read and questioned deeply. Also, Charles maintained his loyalty to and support of ZCLA throughout his years at the Center, which was much appreciated by all who have been concerned with ZCLA’s continuity. What follows are some comments on my experience with Charles as he neared his death. I had the privilege of being close to him much of this time, as a friend and as the steward of a group of residents who took on Charles’s care in the last eight weeks of his life: Robert Diaz, Jitsujo Gauthier, Mukei Horner, Heart-Mirror Trotter, and Taikan Zamora. Additionally, I want to recognize those who took on the care of organizational and legal matters during this time–Sensei Faith-Mind Thoresen, Mary Rios, and Pine-Ocean Cleary.

Charles had heart surgery about six years ago, and at the same time was diagnosed with emphysema. He gradually lost stamina. In addition, about two years ago he was diagnosed with cancer. At that time he decided not to have any treatment. As these conditions affected his daily activities, Charles expressed his interest in an end-of-life choice: he wanted this process to be rational and intention-al; he explored aid-in-dying programs and ultimately chose to follow California’s “End of Life Option Act.” This is the California law, passed in 2015, that permits terminally ill adult patients with the ability to make medical decisions to be prescribed an aid-in-dying medication (the so-called “cocktail”). Certain rigid criteria must be met: in short, the person has to be seen by different doctors multiple times in the process of verifying the patient’s terminal condition, evaluating the patient’s cognition (that is, the ability to make a medical decision on one’s own), verifying that the decision is voluntary, and showing that the patient is able to self-administer the prescribed drugs—to handle and swallow them. The process takes a minimum of three weeks, and at any point the patient may halt it.

A full description of the End of Life Option Act is at Coalition for Compassionate Care California: coalitionccc.org/end-of-life-option-act.

Even as Charles became less mobile in his last months, he continued to be strong in mental acuity and actively conversational. As he weakened and became bedridden, he still expressed the intention of seeing the protocol through to the “cocktail.” At the same time, he knew his capacities were slipping. Hospice nurses had been visiting twice a week for about a month when, on July 21, his breathing was so troubled that I called the nurse, and twenty-four hour care was begun. On the next day, his doctor verified that Charles was not able to continue the protocol; he was not coherent and was not physically able to swallow the prescribed drugs. Just over a day later, at 8:50 PM on July 23, he passed away. He had been gasping for breath, but in the last hour, both breath and body had become very quiet.

Charles died just as a day of sesshin was ending. When his passing was announced to the sangha, a bedside service was also announced for 9:30 that evening. Roughly 30 people came, cramming into Charles’s studio apartment and out the door. Together we read the lovely Bedside Ceremony, which addresses Charles directly, urging him to fearlessly go forward in love and peace to his original home. I found the words and our voices very touching; several people, including the nurse, said that they were especially moved by the recitation. Afterward, some of us hung around the Nilotpala courtyard, sharing stories and remembrances of Charles. Then we went on to arrange the main altar of the Buddha Hall for Charles’s memorial. On that first day, we placed his plaque, picture, tool belt, hat and other articles on the altar. We later found the stole he received as a Sangha Guardian of ZCLA and draped it around his picture; we also added a picture of his beloved cat, Samantha, who had died just a couple of months before. Charles’s picture, stole and plaque remained on the altar for the traditional 49 days of mourning. A memorial service was held for him around the end of that period, on Sunday, September 8th.

Charles left us a good lesson: he had been diligent in designating his wishes and making arrangements long in advance of his ﬁnal illness. It’s a good example for us all! He wished to be cremated, and the agency taking care of that received his body soon after his death. Pine-Ocean took charge of these arrangements and received his cremains, which he later brought to ZCLA, where they were placed on the Buddha Hall altar. During ZCLA’s priest retreat in August, the priests placed a tablespoon of the cremains in the Sangha Urn. After the September 8th memorial service, Pine-Ocean will scatter the rest of the cremains. Not one for “fuss,” Charles desired not to have a ceremony or visitors at the cremation. During the time that Charles was bedridden, he had many visits from sangha members, and he received people as much as his strength would allow. Some people dropped in just to say good-bye, others sat with Charles for a more extended time. In the final two days, when it did not appear that he was conscious of his surroundings, fewer people came, though some sat with him to bear witness to his passing.

During this time, I considered how to practice The Three Tenets with a person who is passing away. For me, in bearing witness, there was no possible “knowing mind” at Charles’s bedside. But because of the many ingredients involved, I couldn’t say that one approach is correct in general. In addition to changing physical conditions, there are differences in family and faith traditions. Just a short time before, I had experienced the dying process of a family member. My family engaged the senses of that loved one, through voice, prayer, touch, music, and so on; the belief is that this envelops the dying in love and creates the best, the sacred, conditions for the journey.

A different approach was taken by Charles’s hospice nurse. When Charles was clearly passing, the nurse said to his friend Pine-Ocean, “He’s going. Come close and talk to him!” At that moment, talking somehow seemed intrusive to me. I asked for input from Roshi Egyoku and others on Buddhists’ understanding of the proper attitude at the time of death. I learned that, from the perspective of our practice, a quiet and respectful presence is most basic–there should be no distractions. This enables the dying person to center all energies on the transition that he or she is experiencing. Chanting is fine–unlike ordinary talk, its energy supports the journey rather than distracting. Roshi Egyoku also mentioned that people taking care of us at ZCLA need to be aware of our Buddhist approach to dying. Even when one “knows” the proper demeanor, it may be difﬁcult to maintain: for example, the person in attendance may struggle with emotions. (In fact, I did so at times.) In my opinion, it is very helpful to have the practitioner(s) present who can take charge of the situation and guide those in attendance on how to respect the transition.

Over time, as Charles’s form changed and he started the transition between this life and what comes next, I experienced him as softening and showing great compassion. Throughout, the sangha responded to Charles with whole-hearted generosity and love. For some of us, his approach to dying, the decisions he made, and the physical changes we saw in him, heightened our awareness of our personal condition, and gave us input regarding our own intentions and decisions. It was an honor to be close to the whole of this situation, to be with Charles’s energies and to see the Sangha Treasure manifest itself.