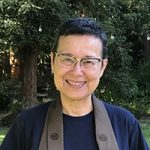 Roshi Wendy Egyoku Nakao is the Abbot Emeritus (1999-2019) and Head Teacher and Head Priest at ZCLA. She is currently developing the Open Palm School of Zen at ZCLA.

Roshi Egyoku first encountered Zen practice in 1975, when she did a seven-day Zen sesshin on a dare. Following this plunge, she devoted her life to the Dharma, finding her way to ZCLA and the Venerable Taizan Maezumi Roshi in 1978. In 1982, she ordained with the Venerable Taungpulu Sayadaw in Bodh Gaya, India. In the following year, she ordained as a Zen Priest with Maezumi Roshi and trained with him until his death in 1995. She continued her training in Yonkers, NY, with Roshi Bernie Glassman from whom she received Preceptor and Dharma Transmission (Shiho) in the White Plum Lineage in 1996, and the Seal of Approval (Inka) in 2004. She is a founding member of the Zen Peacemaker Order.

Roshi is the co-editor with Roshi Eve Myonen Marko of Appreciate Your Life by Taizan Maezumi (Shambhala 2000), and co-editor with Sensei John Daishin Buksbazen of the newly published editions by Wisdom Publications of On Zen Practice: Body, Breath, and Mind (2002) and The Hazy Moon of Enlightenment (2007). Her recent book, The Book of Householder Koans: Waking Up in the Land of Attachments, is co-authored with Roshi Eve Myonen Marko and published by Monkfish Publishers (2020).

An interview about her experiences along the path can be heard at http://www.urbandharma.org/udharma9/dharmatalks1.html. Her oral history is in the UCLA Oral History Archives on  Southern California Buddhism.

Roshi Egyoku grew up in Hawaii in a family of Japanese and Portuguese ancestry. Her interest in spirituality was fueled at an early age by a fierce drive to find meaning in the context of differences. She attended the University of Washington, Seattle, where she received degrees in East Asian Studies and Library Science. Her life partner, Eberhard Fetz, is a neuroscientist at the University of Washington. 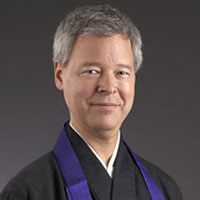 Roshi Ryodo joined ZCLA in 1980 and received Jukai from Maezumi Roshi in the following year. Since 1999, he has been assisting Roshi Egyoku Nakao as a lay teacher. Roshi Egyoku empowered Ryodo as an independent Zen teacher in 2007, made him a lay preceptor in 2015, and gave him inka shomei , or final seal of approval, in 2019.  He has had a life-long interest in the spiritual path, beginning with his readings of the Tao Te Ching at age eleven, The Religions of Man by Huston Smith, and Philip Kapleau’s The Three Pillars of Zen, which sparked his interest in Zen.

After attending the composition program at Berklee College of Music in Boston, where he also studied Philosophy of Religion under Dr. Peter Kreeft, Roshi Ryodo spent many years as a professional musician. From 1988 to 2018 he has made a living as a software developer, winning PC Magazine Editor’s Choice award for his groupware application “TeamTalk” along the way. Roshi Ryodo lives in Westchester, CA, with his wife and son.

Roshi Ryodo leads the Westchester Zen Circle, an affiliated sitting group near Los Angeles International Airport. He also offers workshops on Zen Mindfulness, which he originated in 2002, and is the author of Three Steps to Mindfulness: Bringing Zen Awareness Into Your Life  and the creator of the Zen Mindfulness Cloudbook on the World Wide Web.

This year, Roshi Ryodo became President of the White Plum Asanga (WPA), an affinity organization of peers in the lineage of Hakuyu Taizan Maezumi Roshi. The Asanga provides opportunities for amicable association, the sharing of common experiences, and for members to support one another through online various online discussion forums. 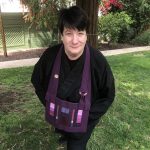 Sensei Senshin became the new Head Teacher at ZCLA on April 10. 2022.  She started studying Zen in the Rinzai tradition at New York Zendo Shobo-Ji in Manhattan in 1987. At Dai Bosatsu Zendo, she received Jukai in 1994 from Eido Shimano Roshi, with whom she studied until 2000 when she moved to Los Angeles. She became a member of ZCLA in 2001 and began her studies with Roshi Egyoku. During her time in New York, Sensei Senshin also studied with various Tibetan teachers and at Fire Lotus Zendo. She also volunteered for ten years at the Ethical Cultural Society’s Homeless Shelter.

She joined the staff as Program Steward in 2010 and the Teacher’s Circle in 2016.  Sensei Senshin was empowered as Dharma Holder in 2018 and was empowered as an independent Zen teacher and Preceptor in 2019.  She is a member of the Lay Zen Teachers Association (LZTA), the American Zen Teachers Association (AZTA), the White Plum Asanga (WPA) and the Zen Peacemaker’s Order of Disorder.

Born and raised in Texas, Sensei Senshin moved to New York in 1978 to attend the Juiliard School’s Drama Division, where she trained as an actress and received the Michele Saint Denis Award for Outstanding Achievement.  She also trained in the rigorous physical theatre of Tadashi Suzuki with his company in Toga-mura Japan.  Currently, she is a professional actor, comedic performer and writer.  Through Theatre of Hearts/Youth First, she also works as an artist-in-residence with at risk kids all over the Los Angeles area and with incarcerated teenagers in the probation camps. 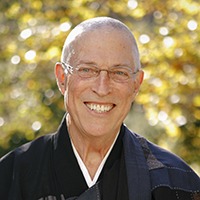 Growing up in the Episcopal Church, Sensei. Mark Kizan Shōgen Bloodgood aspired to become an Episcopal priest during his pre-college years. In the late 1960s and early 1970s, a “subtle feeling” nudged Shogen to read Hermann Hesse’s Siddhartha, Shunryū Suzuki’s Zen Mind, Beginner’s Mind, Philip Kapleau’s The Three Pillars of Zen, Huston Smith’s The Religions of Man and many of the writings of Alan Watts and D.T. Suzuki. Thus, began a love of Eastern religion and philosophy that continues to this day. During this period Shōgen spent time in the Religious Studies Department at Cal State Northridge, California, where he furthered his studies of religion, existentialism, and Buddhism.

On his 50th birthday, during a camping trip in Big Sur, he read an article in Tricycle magazine celebrating the anniversary of Hermann Hesse’s Siddhartha. Shōgen realized he needed to deepen his meditation practice and look for a teacher. In October of 1999, he found his way to the Zen Center of Los Angeles and became a student of Roshi Egyoku Nakao. He received Jukai (lay ordination) in 2005, Tokudo (priest ordination) in 2012, Denkai (preceptor transmission) in 2016, was empowered as a Dharma Holder (Hoshi) in 2019 and received Dharma Transmission (Denbo) in 2019.

He lives in Los Osos, California, with his wife, Karla. 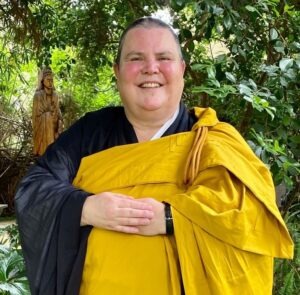 ensei Darla Myoho Fjeld is a Zen Buddhist priest and Temple Development Steward at the Zen Center of Los Angeles. She began her practice at the Zen Studies Society in New York in 1996 and in 1997 began practicing at the Fire Lotus Zendo in New York. While in New York she was a political organizer and then spent 9 years as a Research Associate for the Auburn Seminary Center for the Study of Theological Education. She began her practice at ZCLA in 2001. She was the Development Director and then the Executive Director of Coalition LA, a poor people’s organization for 8 years. She earned a M.Div and STM from Union Theological Seminary in New York from 1981-1985. She has a Ph.D. in the Philosophy of Religion from Drew University, Madison, NJ and taught at El Camino College in Torrance, CA for 20 years.

For the Statement of Ethics for ZCLA Teachers, click here.